Where Does Death Come From?

Home » Where Does Death Come From?

When we look for the cause of death in the Scriptures, we find something that may be surprising. Death is first announced by God’s own lips. God told Adam in Genesis 2 that he could surely eat of any tree but one, and that on the day he ate from the one forbidden tree, he would just as surely die. This means, counterintuitively, that death is God’s idea.

After all, Adam didn’t come up with the idea of death. What did Adam know of death? The Genesis account says that all of creation was good, in fact “very good,” when God finished it. If death is bad then there was no death in the garden. Death was not Adam’s idea. It wasn’t even the serpent’s idea. It was God’s.

As punishment for sin, death is perfectly in keeping with the crime. To understand why this is the case, we must understand the nature of sin. God did not punish Adam and Eve for something trivial, like picking from the wrong fruit basket; death is not about our dietary choices! No, when Adam and Eve sinned, when they disobeyed God, they were, in essence, turning away from God and, worse, putting themselves in his place.

And who was this God? He is the Lord and Giver of life. He is the one who “breathed into his [Adam’s] nostrils the breath of life” so that he “became a living creature” (Gen 2.7). This means that no life is really self-sustaining; God is its ultimate source. Adam and Eve didn’t create themselves any more than we gave birth to ourselves. This helps to explain the fittingness of death as the promised judgment for rejecting God.

It’s only right that disobedience from God brings death. “The wages of sin is death,” as Paul says in Romans 5:8a. When you turn from the only source of life, the only thing there to meet you on the other side is death. No coroner can truly say that someone died of “natural” causes. The reality is that everyone dies from one ultimate cause: sin—rejecting the Giver of life. It is anything but natural.

But it’s not sin in general (or even our sins in particular) that are the ultimate cause of death. When we look at the line of death in Genesis 5, we can and must say something more. We not only die because we rebel against God; we die because our first parents rebelled against God, and we are all the sons of Adam and daughters of Eve.

With Cain and Abel out of the picture, Genesis 5 begins to focus on Seth. Notice what the text says about Seth’s relationship to his father, Adam.

You’ll remember from Genesis 1:26–27 that God imprinted on humanity his own image, the mark of his own character and likeness. We hear that repeated in Genesis 5:1–2. But then we learn something more. Look at 5:3:

When Adam had lived 130 years, he fathered a son in his own likeness, after his image, and named him Seth.

Do you see the point? Not only is Seth made in the image and likeness of God by virtue of being human, he is also made in the likeness and image of Adam. But what kind of image is it? It is one that is terribly and devastatingly marred by sin. It is an image that is doomed by the sting of death.

I suspect this explains the otherwise curious reversal of the terms “likeness” and “image” in verse 3 when compared with Genesis 1:26. And this dual bearing of both God’s image and Adam’s image also explains something otherwise very hard to accept. It explains why we can be held responsible for Adam’s sin.

Perhaps you have wondered about the Christian doctrine of original sin. This doctrine teaches that we are held responsible for Adam’s sin. But why? After all, I wasn’t there. You weren’t there either. What has Adam got to do with us? The answer from Genesis is everything.

The reason is that he is our father, and we are his children. We are all—like it or not—sons of Adam and daughters of Eve. Not merely in the sense that we belong to the same species as them with arms and legs and brains and eyes and ears and all the rest. But we are Adam’s children in a legal and spiritual sense. As a result, what he did defines, marks, and affects us all.

Christians have long recognized both how offensive this belief is and, yet, just how essential and inescapable it is as well. The famed French theologian and philosopher, Blaise Pascal, recognized this when he wrote in his Pensées:

Pascal is saying that as difficult as original sin is to accept, it is the only thing that finally explains why we are the way we are. Without it, we become inexplicable. I think we realize this most when we have sinned in some way that shocks even ourselves. When we do something deeply out of character. In those moments, we must feel like David who said, after sinning with Bathsheba, “I know my transgressions, and my sin is ever before me. … Behold, I was brought forth in iniquity, and in sin did my mother conceive me” (Psalm 51:3). We begin to realize that sin has been with us since the beginning.

It’s not that David was illegitimate or conceived out of wedlock, but he realizes that his sin runs deep in his veins. It was there even at his birth because it had been there from the beginning—from the garden.

We are then, as humans, a great contradiction. As Daniel Migliore writes in Faith Seeking Understanding:

We human beings are a mystery to ourselves. We are rational and irrational, civilized and savage, capable of deep friendship and murderous hostility, free and in bondage, the pinnacle of creation and its greatest danger. We are Rembrandt and Hitler, Mozart and Stalin, Antigone and Lady Macbeth, Ruth and Jezebel. “What a work of art,” says Shakespeare of humanity. “We are very dangerous,” says Arthur Miller in After the Fall. “We meet … not in some garden of wax fruit and painted leaves that lies East of Eden, but after the Fall, after many, many deaths.”

Death is universal, and it’s personal. It is also very bad. And now we know where it comes from. Death comes as the punishment for our sin. Even more devastating, it comes from the sin of our father Adam who cast us all into deep depravity and guilt.

This post is part two of three in a series on “Death’s Refrain.” You can read part one here. 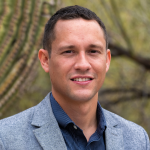 Peter Gurry joined the Phoenix Seminary faculty in 2017 and teaches courses in Greek Language and New Testament literature. His research interests range across the history and formation of the Bible, Greek grammar, and the history of New Testament scholarship. He has presented his work at the Society of Biblical Literature, the Evangelical Theological Society, and the British New Testament Conference. He and his wife have six children and are members at Whitton Avenue Bible Church.