Three Medieval Theologians You Should Read

C .S. Lewis once wrote that we should read two old books for every new book. The reason for this is that old books are able to lead us towards different ways of thinking, to say nothing of providing us with different perspectives than the ones bombarding us every day. But surely this advice doesn’t include books that were written from a worldview in which there are obvious errors? Should we, for instance, read medieval texts? Some authors, after all, believed the earth was at the center of the universe. Their periodic table of the elements included earth, wind, fire and air. And as for medieval views on medicine, well, let’s not go there! True, there were some odd ideas floating around in the Middle Ages, but in his influential book, The Discarded Image, Lewis makes the persuasive case that no worldview is an infallible catalogue of ultimate realities just as none is mere fantasy. This is a stark reminder that even in our own day we have bought into and include certain fantasies in our thinking that we don’t, can’t, or won’t see.

Helping to raise our gaze beyond the horizon of contemporary culture are medieval authors such as Thomas Aquinas, Anselm of Canterbury and Gregory the Great. At different times in history each of these has received equal measures of praise and disdain. Aquinas, for example, has found both admirers and detractors amongst evangelicals. Anselm is both beloved and eyed with suspicion by Christian readers. Gregory has been loved for his pastoral sensitivity and despised for being a pope. Truly, great spirits have always encountered opposition from mediocre minds. What I find encouraging, however, is that there is a growing, healthy interest in medieval theology. There is a line of faithfulness to God’s Word that extends from us back through both the Reformation and the Middle Ages, and we ignore it to our detriment because of the riches deposited there by the Holy Spirit.

Now that you are excited and ready to get reading, where should you begin? Here are three short samples that will whet your appetite for more.

Gregory the Great – The Pastoral Rule

Gregory the Great was the pope from 590–604 and well deserved the title, “Great.” Gregory overcame tremendous obstacles in a world that was crumbling politically and economically as the Roman Empire was in the latter stages of its collapse. He cared deeply about planting churches, training pastors and spreading the gospel. He may be most famous for sending a monk named Augustine (not the famous author of the Confessions) to England along with about 40 other people to help in the work of evangelizing pagans. The Venerable Bede records the essence of these men’s hearts by preserving the letters Augustine and Gregory wrote to one another as they grappled with the practical issues of church planting and discipling new converts.

Among the works for which Gregory is best known, at the top of the list is his work, The Pastoral Rule. If you are tired of the drumbeat, that seems to be growing incessantly louder these days, that propounds a version of pastoral ministry that glorifies personality, extroversion, magnetic charisma and enthusiasm, this will be a balm for your soul. Here Gregory speaks of Christ likeness, character, integrity in public relations as well as in private living, and piety that flows from the work of the Spirit.

I commend to you the translation published by St. Vladimir’s Seminary Press, 2007. For further reading on Gregory you could begin with R.A. Markus’ Gregory the Great and his World.

At the beginning of his life, no one would have guessed that Anselm would one day become the Archbishop of Canterbury in England. Born to an upper middle class family in north Italy, Anselm seemed destined for anything but the ministry. After his mother’s untimely death and due to a deteriorating relationship with his father, Anselm struck out on his own and wandered Europe for three years. After that time, he settled down and pursued studies with the most famous teacher of his day who eventually convinced him to become a monk at Bec in northwest France. Anselm’s evident intelligence, administrative acuity and political savvy led to him climbing the ranks from monk to prior to abbot to archbishop. Even with the demands and distractions that come at the highest levels of leadership, Anselm continued to pastor and write.

Anselm is probably most famous for two works: his Proslogion in which he argues for God’s existence and his Cur Deus Homo in which he sets out a satisfaction model of the atonement that is a precursor to later expressions of substitutionary atonement. While I heartily recommend both of these, I have found his very short (8 pages) Meditation on Human Redemption to be very rewarding. Like so many of Anselm’s works, it is best read slowly and contemplatively. Consider, “O hidden strength: a man hangs on a cross and lifts the load of eternal death from the human race; a man nailed to the wood looses the bonds of everlasting death that hold fast the world.” (my emphasis) As friends of mine might say, “That’ll preach!”

I commend to you the translation published by Penguin Classics that, happily, not only contains the Meditation on Human Redemption, but also Anselm’s other prayers and meditations. For further reading on Anselm, Eileen Sweeney’s contribution is the most recent, Anselm of Canterbury and the Desire for the Word.

On the one hand, Thomas Aquinas needs no introduction because, of all the figures in medieval Europe, Aquinas casts the longest shadow. On the other hand, while many have heard his name, their knowledge of who he was and why he matters is less clear. Much like Anselm, Aquinas was born into a well to do family in Italy who sent him away for an elite private school education. When political troubles erupted, Aquinas was forced to move and studied first at Naples and then at the University of Paris. In both places he outpaced his contemporaries, but because of his quiet, introverted demeanor, he was mocked by his fellow students as the “Dumb Ox” (he struggled with a weight problem). Eventually, when one of the greatest theologians in Europe overheard this mocking he upbraided the students telling them that one day the whole world would hear Aquinas’s voice. And so we have!

The text for which Aquinas is most famous is his systematic theology, the Summa Theologica. A similar work, but written with a more apologetic edge, is his Summa Contra Gentiles. Both of these are worth reading, but both of them are, well, about 1,500+ pages longer than the average tome. Among the myriad options of other works by Aquinas, it would be worth settling down with The Sermon Conferences of St. Thomas Aquinas on the Apostles’ Creed. As you would expect from the title, this is a collection of sermons Thomas preached on each line of the Apostles’ Creed. Here you will find a down to earth, street view of the great man’s theology in bite-sized morsels.

I commend to you the volume edited and introduced by Nicholas Ayo (for those of you eager to brush up on your Latin, this edition has the Latin text on the left page and the English translation on the right). For further reading on Thomas Aquinas a good place to start would be Denys Turner’s Thomas Aquinas: a Portrait. 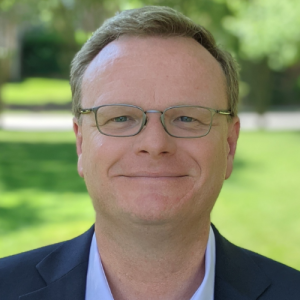 Dr. David Hogg serves as professor of Church History and director of Library Services at Phoenix Seminary. Prior to joining Phoenix Seminary, Dr. Hogg taught at the University of St. Andrews in Scotland, Southeastern Baptist Theological Seminary in North Carolina and Beeson Divinity School in Alabama where he was also the Academic Dean. In addition to his academic pursuits, Dr. Hogg was an Associate Pastor and then Senior Pastor over an 11 year period. Dr. Hogg and his wife Sarah have three boys and, as a family, represent three different nationalities.