Steven J. Duby won first place in the “Theology (Academic)” category for his book, Jesus and the God of Classical Theism: Biblical Christology in Light of the Doctrine of God, which was released in June through Baker Academic. Meanwhile, Scribes & Scripture: The Amazing Story of How We Got the Bible, which was authored by Peter J. Gurry and John D. Meade, was a finalist in the “Bible & Devotional” category. Scribes & Scripture was released in October by Crossway.

“I was delighted, but not surprised, to see Drs. Duby, Meade and Gurry make the list at Christianity Today,” said Dr. Brian J. Arnold, Phoenix Seminary’s president. “I consider our faculty to be among the best of evangelical seminaries, and recognition of their work from an outlet such as CT validates the strength of the scholars we have.”

Duby is an associate professor of systematic theology at Phoenix, a role he transitioned into last summer after serving on a temporary provost appointment at the seminary.

Duby wrote his book, he said, “to show that the Bible’s account of the person and work of Christ fits well with a robust doctrine of God that includes divine attributes like aseity, impassibility, and simplicity.”

According to the Baker Academic website, Jesus and the God of Classical Theism “explains how the Jesus revealed in Scripture comports with earlier Christian descriptions of God. Steven Duby argues that the Bible’s Christology coheres with and even requires the affirmation of divine attributes like immutability, impassibility, eternity, and simplicity. Duby offers a constructive treatment of the person of Christ, illuminating his relationship to the Father and the Spirit, the unity of his person, and the genuineness of his human life and suffering.” 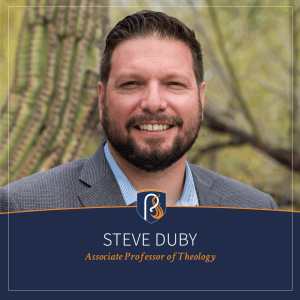 In its book award review, Christianity Today called Duby’s work an “erudite and substantial volume” and “an important work, especially at a moment in evangelical theology, and in Christian theology more broadly, when contemporary theologians are rediscovering and reappraising the rich resources of the Christian past.”

The Christianity Today review goes on to say, “Duby interacts with a wide range of sources: ancient philosophers, church fathers, medieval doctors, Reformers, and post-Reformation scholastics, as well as modern theologians and biblical exegetes. But most impressive is Duby’s deep engagement with the text of Scripture itself, which he treats with exegetical care and theological earnestness.”

“I’m very pleased that the book has been beneficial for people interested in Christology and hope that the subject matter continues to occupy the attention of the church and academy,” Duby said.

The CT award speaks to Duby’s knowledge and expertise in his field, according to Arnold.

“Winning the best book in academic theology is no small feat,” Arnold said. “Not only is the competition fierce, but it requires a scholar who can think new thoughts on old doctrines, balancing innovation with historic Christian orthodoxy. Dr. Duby has proven himself to be such a scholar. Not even forty, he is already looked to as an established voice in theology. I appreciate the care he takes with primary sources, and he really shines in his ability to retrieve the great tradition. The scope of his learning is as deep as it is wide.”

Meanwhile, Gurry and Meade were excited that their book, Scribes & Scripture, reached the final round of consideration in the “Bible & Devotional” category. First place went to Heaven and Nature Sing: 25 Advent Reflections to Bring Joy to the World (B&H) by Hannah Anderson. 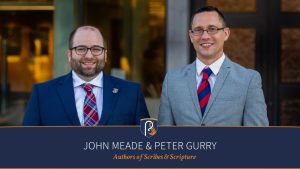 “Honestly, when you write any book, you pour yourself into it and you’re happy to have it published,” Meade said. “I didn’t write Scribes & Scripture thinking it would receive any further recognition. So to say that I was surprised to receive this honor is a bit of an understatement.”

In Scribes & Scripture, Gurry and Meade provide well-researched answers to some of the biggest questions surrounding the Bible and the story behind our modern-day English versions. Scribes & Scripture covers three main topics: the text, canonization, and translation of Scripture. The book is the result of years of academic scholarship at the highest level in text criticism and canon studies.

Gurry is an associate professor of New Testament, while Meade is a professor of Old Testament. Both men are also co-directors of the Text & Canon Institute at Phoenix.

“Drs. Meade and Gurry have successfully brought the best of Christian scholarship down to the level of the pew,” Arnold said. “At some point, every thinking Christian wonders how we got the Bible, which is the precursor to whether or not we can trust the Bible as God’s Word. Because of their labor, Christians will have greater confidence to base their lives on the truths in Scripture.”

Meade is excited about the CT recognition for two reasons.

“First, the matter of the Bible’s history is a serious point of contention today in the culture,” he said. “The church must know the facts about its history and formation, and this award will hopefully continue to highlight that question to a wider audience. Secondly, I’m very pleased that this award will draw extra attention to Phoenix Seminary. I’m in my 11th year teaching at the seminary, and I hope this book and its recognition will help prospective students and supporters seriously consider joining this amazing community.”

– This article was written by Joshua Cooley