What a pastor should know about developments in textual criticism. Part 3: New Resources

Home » What a pastor should know about developments in textual criticism. Part 3: New Resources

We have been considering what a pastor should know about recent developments in textual criticism, a discipline that aims to recover the original words of the New Testament authors. The previous posts have considered new editions of the Greek New Testament and a new method of practicing textual criticism and now we should mention the accessibility of new resources. Many of these are due to the remarkable work of various organizations and the ability of the internet to connect and share information. Of the many resources I could mention, let me introduce three to you. 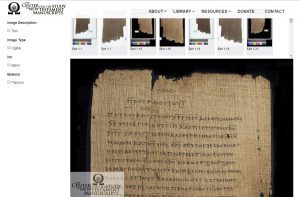 The first resource is digital images. In the last decade, there has been an explosion of manuscript images made available, often for free, online. The Center for the Study of New Testament Manuscripts is one major organization that has been hard at work to digitize manuscripts all over the world. Whenever possible, they put these images online for free at csntm.org. The search feature is especially useful as it allows you search keyword or verse and to sort results by a range of manuscript feature.

If you were teaching on one of the Gospels, why not introduce your congregation to P45, one of the earliest copies of the four Gospels and Acts? Or maybe you are teaching on Ephesians and want to show a Sunday school class the missing words “in Ephesus” in P46, one of the earliest manuscripts of Paul’s letters (note that the book is still titled “To the Ephesians”). Or, share the beautiful artwork in GA 808, a rare complete copy of the New Testament from the 13th–14th century.

Along with CSNTM, many of the world’s great libraries are busy digitizing their manuscripts and putting them online too. Without leaving home, you can now explore Codex Vaticanus (03) held at the Vatican, or the palimpsest Codex Ephraemi Rescriptus (04) at the French Bibliothèque nationale, Codex Bezae (05) of the British Library, or see the famous Codex Sinaiticus (01) all in one place, something physically impossible because the manuscript itself is split and housed at four separate institutions. All this is just the tip of the digital iceberg. 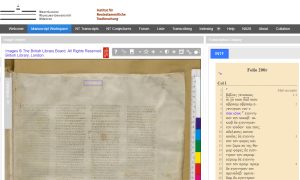 The Manuscript Workspace in the NT.VMR

Although looking at incredible manuscripts online is thrilling, tracking them down can be tricky unless you know what to look for. That brings me to the second resource I want to mention called the New Testament Virtual Manuscript Room or NT.VMR.

If I can brag for a minute, the NT.VMR was largely designed and is still developed by one of our own Phoenix Seminary graduates, Troy Griffitts. Troy has been instrumental in developing this remarkable resource which has become indispensable to academic text-critical work.

At the NT.VMR, you can see the official list of New Testament manuscripts, view images of many of them, consult scholarly transcripts of manuscripts, study the history of scholarly conjectures about the New Testament text, discuss these with other people, and so much more. It is a rich resource and it keeps getting more valuable. The STEP Bible allows free access to THGNT as well as other translations and editions.

The final resources I want to mention take us back to the first post in this series which introduced several new editions of the Greek New Testament. Ideally, you will want to have a print copy of one of those editions because each comes with valuable detail in the apparatus or in the margins. But if all you need is the text itself for reading or study, all of these are now freely available online.

For the Tyndale House edition, one can find the text at esv.org/gnt or at stepbible.org, complete with additional vocabulary and parsing help. The NA28/UBS5 text is also online at nestle-aland.com/en/read-na28-online though without the extra helps. These free, digital editions can be helpful for when you’re away from your study or if you want to copy and paste the text into your study notes for things like diagramming, color-coding, etc.

In conclusion, we can say two things about advances in New Testament textual criticism. First, the Bibles that we have in our hands now—whether English or Greek—are founded on a solid double foundation of overall good transmission and excellent scholarly study of that history. Because of that, we should not hesitate to preach and teach from these editions even as they alert us to some places that remain difficult. Second, the study of our New Testament text and how it was transmitted to us is advancing in new and promising ways. The new editions, new method, and new resources mentioned in this series give us access to the history of God’s word in ways impossible to imagine even a generation ago.

In the words of a famed text critic from the 19th century, “It cannot be a matter of indifference to know how the New Testament … has come down to us; to look at the Manuscripts from which our fathers drew words of life, to trace the stirring history of the version through which the teaching of Apostles has been made accessible to men of other tongues.” Let us be eager to study the remarkable history of God’s book and to share it with God’s people.