What a pastor should know about developments in textual criticism. Part 2: A New Method

Home » What a pastor should know about developments in textual criticism. Part 2: A New Method

In our last post, I briefly introduced two new editions of the Greek New Testament, the Nestle-Aland (NA28) and the United Bible Societies (UBS5) and noted that a new computer-aided method was used to edit their text in the Catholic Letters. The new method is known unmemorably as the “Coherence-Based Genealogical Method” or CBGM for short and in this post, I want to introduce it to you very briefly. The CBGM has been in development since the early 1980s, but its results have been widely available only in the last five years.

The CBGM is not known for being simple, but essentially it harnesses the power of the computer and the vast increase in our knowledge of New Testament manuscripts to help scholars make better, more consistent textual decisions. The method works by using the overall relationship between texts to resolve particular textual problems. For example, if the computer shows us that two distantly-related texts share the same variant reading, this might indicate that the reading was created independently by the scribes of those texts. This, in turn, could suggest that the reading is less likely to be original. Beyond that, the CBGM can even help us tell the larger story of how the New Testament text has been copied over centuries. And that too can help us determine or confirm the text.

A diagram like this helps scholars use the overall relationship of texts in the CBGM to help relate individual variants.

The method has now been applied thoroughly to the Catholic Letters and just recently to Acts too. The data are available online. This resulted in 54 textual changes in Acts and 34 in the General Epistles. Most of these don’t affect English translation let alone theology. But a small handful are significant.

The most important change, in my opinion, is found at 2 Peter 3:10 where the NA28 and UBS5 now read that in the day of the Lord, “the earth and all that is in it will not be found.” The inclusion of the word “not” where before there was none is obviously important. More significant still, this reading has no known Greek manuscript support, raising serious questions about its validity. Notably, this change has already affected the CSB translation and may well affect the recently announced revision of the NRSV.

Just as important for a pastor, however, is the evidence the CBGM provides for how well the New Testament text was copied overall. To be sure, there are many variants in our New Testament manuscripts—perhaps as many as half a million. Most of these are trivial or easily resolved and, when considered in light of how many times our New Testament books were copied, what stands out most is how faithfully scribes did their work. The advent of the CBGM allows us to quantify this fidelity like never before.

In the Catholic Letters, for example, there are two manuscripts that agree at 99.1 percent of all places where there is variation in the 123 manuscripts used by the CBGM. They only differ in a total of 27 out of 2,859 places where they were compared. That is quite remarkable. The average textual agreement between all pairs of witnesses reaches 87.6 percent. That too is impressive. Similar numbers occur in Acts. 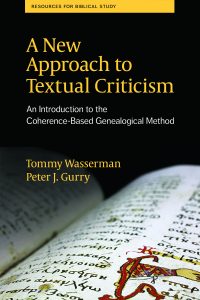 In fact, most of us have been reading substantially the same Greek New Testament for two thousand years thanks to careful scribes. And rather than being an impediment to faith, modern textual criticism actually supports it. Even Marcus Borg, a New Testament scholar who is far from being an Evangelical Christian, has written that “with only a few minor exceptions, we can be confident that the Gospels and the New Testament as a whole reliably report what was originally written.”

Yes, verbiage will change in certain places as a result of further research, and tricky textual problems do remain. But because of the overall fidelity of scribes over 1500 years combined with the herculean efforts of textual scholars, we can be confident that the text we have in our Greek editions and in our English translations is more than enough to ground our faith in the New Testament’s witness to Jesus Christ. The advent of cutting-edge methods like the CBGM have made that more apparent than ever before.