Dr. Kyle DiRoberts, Adjunct Professor at Phoenix Seminary, has recently graduated with the PhD degree from Dallas Theological Seminary, and a revision of his dissertation was published by Wipf & Stock Publishers. Below, Kyle tells us about his new book and why he wrote it. 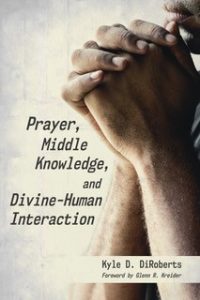 I wrote Prayer, Middle Knowledge, and Divine-Human Interaction out of a desire to understand the divine-human relationship in petitionary prayer. Christians generally believe that in prayer they are free in their act to petition God. Christians also believe that they pray to a God that is sovereign and omniscient. Explanation as to how one affirms these two truths is dependent upon one’s account of divine providence, which determines how motivated the person is to offer petitionary prayer in the divine-human relationship.

The models of divine providence in question in the book include: compatibilism, hard determinism, open theism, and middle knowledge. Ultimately, I argue that middle knowledge is the preferred theory of providence as it relates to petitionary prayer, because it argues that God’s sovereignty includes both his omniscience and libertarian human freedom. According to William Hasker, middle knowledge is “the only game in town” able to make this claim. However, the tension between God’s sovereignty and human freedom in petitionary prayer is palpable, and each scholar representing the theories of divine providence discussed in this book has humbly handled this tension. At points throughout the book, each scholar has argued with confidence while at other times willing to subject his understanding of petitionary prayer to mystery.

This book also contains an important challenge for the believer. This summer I’ve had the pleasure of teaching an elective course at Phoenix Seminary entitled The Theology and Practice of Prayer, which is a course designed around this book. On our very first evening together I began by asking them to tell me what they think about God, assuring them, that I could then describe what they think about prayer. Once we dealt with that question I asked about what they think about prayer, because again, once they tell me their views concerning prayer, then I can describe what they think about God. The students enjoyed this thought exercise, but we weren’t finished. I then revealed my cards, that the challenge of the course is to make sure their views concerning God match their understanding of prayer. My concern was that some sitting in the room might hold a view concerning God that doesn’t match how they functionally pray, either in private or within the church. Thus, it is imperative for the Christian to form consistency between theology and praxis as it relates to prayer.

While each scholar believes that his theory of providence handles the divine-human interaction in prayer the best, not one scholar noted in this book is antagonistic towards the sovereignty of God or human freedom. It is just the opposite. These scholars are trying to love God with all their heart, soul, and mind. With that attempt, I want this book to reside.

I hope this book will be helpful as Christians construct a view concerning petitionary prayer that would propel them toward God in relationship and then lead the body of Christ to pray without ceasing (1 Thess 5:17).

Dr. Kyle DiRoberts (PhD, Dallas Theological Seminary) is an Adjunct Professor at Phoenix Seminary. In addition to Phoenix Seminary, he also teaches Bible and Theology at Grand Canyon University and Arizona Christian University. He also serves as Associate Venue Campus Pastor to The Venue at Scottsdale Bible Church. Kyle and his wife, Alanna, live in Scottsdale with their two children (Kaden and Oliver). You can follow him on Twitter.