Nathan Tarr, a noted pastor, professor, and historical theologian, has been hired as associate professor of pastoral theology and director of the doctor of ministry program at Phoenix Seminary, President Brian Arnold announced on May 19, 2022. Tarr will begin his role on July 1.

His appointment affirms Phoenix Seminary’s foundational commitment to “Scholarship with a Shepherd’s Heart,” according to Arnold. 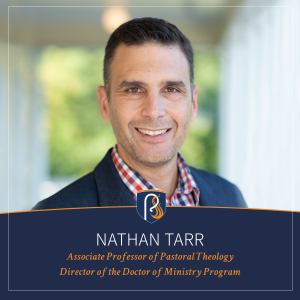 “All of our professors embody ‘Scholarship with a Shepherd’s Heart,’” Arnold said. “But it is also important to have a faculty member who focuses exclusively on preparing our students for the challenges and triumphs of local church ministry. We are in the business of training ministry leaders whose hearts are as full as their heads. Dr. Tarr is a heart on fire and a head full of truth.”

“I am convinced that the vision of Phoenix Seminary—‘Scholarship with a Pastor’s Heart’—is exactly what the church in the West needs to recover and maintain her health: a rigorous engagement with the truth, not for its own sake, but to serve the spiritual vitality of the saints,” Tarr said. “To capitalize on the potential of this vision, and to stay true to their mission, however, requires a certain kind of institutional culture. It requires a level of like-mindedness, for-ness, and spiritual integrity that is, frankly, rare. What drew me to Phoenix Seminary, after spending time with the faculty and administration, was recognizing the alignment between the vision of the institution and its culture. This is the kind of place the Lord loves to bless! And I am eager to be a part of it.”

For the past year, Tarr has served as the director of discipleship and campus ministry at St. David’s School, a private Christian school in Raleigh, N.C. Before that, he enjoyed many years of pastoral experience, first as the founding pastor of Christ Church in Knoxville, Tenn. (2005-2018), and then as the associate pastor of discipleship and missions at Christ Baptist Church in Raleigh, N.C. (2018-2020).

When John Piper stepped down after 33 years as the lead pastor at Bethlehem Baptist Church (Minn.) in 2013, he briefly attended Tarr’s church in Knoxville.

“I am thrilled that Nathan Tarr has been appointed associate professor of pastoral theology at Phoenix Seminary,” said Piper, who is also the chancellor at Bethlehem College and Seminary. “For an entire year with my wife and daughter, I sat under Nathan’s expositional preaching in Knoxville. What a rich fare it was. It was also a joy to watch him embody the injunction of 2 Timothy 2:2 as he mentored younger men: ‘What you have heard from me in the presence of many witnesses entrust to faithful men, who will be able to teach others also.’ His wife, Devon, has the same heart for discipling, so they make a remarkable team. God has been good to Phoenix Seminary.”

Tarr brings a wealth of teaching experience to Phoenix, including plenty of international graduate-level teaching in Ethiopia, the Netherlands, Brazil, Croatia, Uganda and Romania.

Tarr says some of his favorite times in teaching are the “aha moments where the dots connect.” He has witnessed students from four Eastern European countries put aside ethnic differences under the gospel’s banner. While teaching a seminary course on the Reformation in Brazil, the class suddenly broke out into singing the doxology at the end of his lecture.

“It was a powerful reminder not only of the tribes and tongues that gather to give praise to the Lamb seated on the throne, but also of the way theology is meant always to stir our hearts toward doxology,” he said.

Tarr is excited to bring his pastoral experience to bear at the seminary.

“As a young church-planter, I benefitted tremendously from the example, encouragement, and instruction of seasoned servants,” he said. “Investing in future leaders has, in turn, been one of the most fulfilling aspects of my 18 years of pastoral ministry. With a student body comprised of aspiring church leaders, and those who desire to increase in their effectiveness, Phoenix Seminary is a natural extension of this commitment.”

After doing his undergraduate work at Wheaton College (Ill.), Tarr earned four advanced degrees—a Master of Arts in Theological Studies from The Nazarene Theological Seminary (Kansas City, Mo.) in 2005; Master of Divinity from The King’s College and Seminary (Los Angeles) in 2009; Master of Theology from The Southern Baptist Theological Seminary (Louisville, Ky.) in 2012; and a Ph.D. in Biblical Spirituality from SBTS in 2018. Tarr did his Ph.D. work under Michael A.G. Haykin, a prominent patristics and Baptist church historian.

In addition to all these experiences, Tarr has served as chaplain for the 134th Air Refueling Wing of the Tennessee Air National Guard since 2017. He has also written extensively, publishing a few dozen peer-reviewed papers, conference papers and other articles. He contributed 33 entries to Haykin’s forthcoming The Lexham Dictionary of Church History (fall 2022), and he has published often on the Desiring God website, among others.

“Dr. Tarr brings a vast wealth of experience in pastoral ministry,” said Dr. J. Michael Thigpen, Phoenix Seminary’s provost and executive vice president. “He has successfully planted and pastored, served as a pastor of discipleship, and served in our armed forces as a military chaplain. This experience will help him guide and strengthen our students, and his voice around the faculty table will benefit the institution as a whole.”