The following is an interview with Dr. John Meade, Associate Professor of Old Testament and Co-Director of the seminary’s Text & Canon Institute. Dr. Meade recently completed a major 10-year project on the text of Job and we are excited to celebrate this major achievement with him. 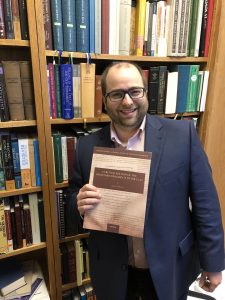 PS: How did you take an interest in the Hexapla and how long did you work on this Edition?

JM: I first became exposed to the Hexapla in a seminary course on Hebrew exegesis of Proverbs. Peter Gentry required us to work on problems in the wording of the text of Proverbs, and we became acquainted with the sources for doing such work. In addition to the well-known sources of the Dead Sea Scrolls, Septuagint, Aramaic Targums, Latin Vulgate, and Syriac Peshitta, he also taught us about the fragmentary remains of Origen’s Hexapla. He also said that we don’t have very good critical editions of these remains but that the Hexapla Institute was committed to rectifying this situation. I was hooked!

When I became a PhD student, I was still unsure what my dissertation would be, but fairly soon, I settled on Job 22–42. That was in 2008, and I began work on the edition in 2009-2010. A Critical Edition of the Hexaplaric Fragments of Job 22–42 was finally published by Peeters in January of 2020.

PS: What is a Critical Edition of the Hexaplaric Fragments?

JM: Good question. Many people will be immediately confused by the words in the title of my book. Let’s start with the word “Hexaplaric.” The Greek word “Hexapla” (pronounced Hex.u.pla) means “six-fold” or “six-columned.” Around 235 AD, Origen of Alexandria (d. 254) compiled six Jewish editions of the Hebrew Scriptures/Old Testament into his six-parallel-columned edition: (1) the Hebrew text, (2) the transcribed Hebrew text in Greek letters, (3) Aquila (Greek), (4) Symmachus (Greek), (5) the Septuagint, and (6) Theodotion (Greek). The Hebrew text and the Greek Septuagint had been around for a very long time, but in the first and second centuries AD, Theodotion, Aquila, and Symmachus had also revised the earlier translations to conform more closely to the Hebrew text and also to reflect more contemporary ways of reading the Hebrew. The Hexapla would have been a monstrosity when Origen first compiled it, and I’ve said more about it here. It was probably never copied in its entirety, and that’s where the work of textual criticism becomes essential.

What was the original wording of the Hexapla? A “Critical Edition” is necessary to tell that story. A “Critical Edition” refers to the scientific nature of the text. My edition incorporates all extant evidence of manuscripts, church father citations, and ancient translations in order to establish the original wording of the remains of the Hexapla and also report the variants to that reading in a series of apparatuses. There were past editions which I’ve written about here.

PS: Do the hexaplaric readings of Job affect our English Bibles?

JM: In short, yes. The hexaplaric readings usually agree with the Hebrew text upon which our English translations are based. But in some cases, they differ and preserve an older text. I’ll limit myself to two examples where the ESV has based its translation of Job on Hexaplaric versions, but you may not have known it.

PS: What are your next Projects?

JM: Well, I’m in the midst of working with Peter Gentry on a History of the Hexapla, that is, writing the story of its origins, use, and afterlife. The Text & Canon Institute will be hosting a related Colloquium on Origen as Philologist this November. I’m also working with Peter Gurry on a more popular book explaining how we got the Bible. So there’s plenty to do.

PS: Thanks for taking some time with us, Dr. Meade!

Interested in studying with Dr. Meade and our other faculty? Our ThM in Biblical Studies is an advanced post-graduate degree for in-depth study of the Bible. The Text & Canon Institute Fellowship is a one-year scholarship and mentoring program for qualified ThM students who intend to pursue doctoral studies in Old or New Testament textual criticism, canon studies, or ancillary disciplines.