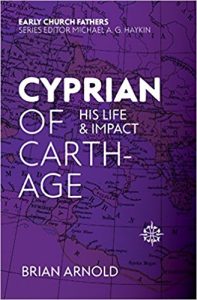 Retrieval from earlier epochs of Christian history seems to be all the rage these days, and for good reason. In the increasingly chaotic realm of evangelicalism, believers are looking for deeper roots and many are turning to the fathers. In this quest for retrieval, we need to take another look at figures like Cyprian of Carthage, who have valuable things to say to the church today.

Cyprian (c. AD 200–258) was born a pagan of high station and likely did not come to faith until his 40s. Not long after his conversion he became the bishop of Carthage and soon after that, Emperor Decius unleashed a major persecution. A plague followed the persecution and then another persecution followed the plague. Cyprian was able to flee from the first persecution, but he was not so lucky the second time around. On September 14, 258, he was executed by the sword.

Cyprian’s most significant legacy was his doctrine of the church. These persecutions revealed large cracks in the church’s infrastructure, which led him to write On the Unity of the Church. For Cyprian, the nature of the church is her unity. The church cannot be split as several factions had tried to do in picking up the pieces after the persecution. It is in this work that we find one of his most famous lines: “You cannot have God as your Father if you do not have the Church as your Mother.” In a letter written several years later he even upped the ante, saying, “There is no salvation outside the church.”

Many evangelicals would have a tough time swallowing these words. It sounds as though Cyprian is adding to salvation by faith alone. While we would not want to add church attendance to a checklist for salvation, we should have enough concern for people who claim to be Christians but who are not connected to the bride of Christ to tell them that we do not think they are believers. To be a Christian is to be part of the universal church, but this should also mean being a part of the local church.

A lot of the problems in evangelicalism stem from a low ecclesiology. If we are going to secure that area of our theology, then we will need voices like Cyprian to help show us the way.

Michael Haykin, Rediscovering the Church Fathers: Who They Were and How They Shaped the Church.

Dr. Arnold joined the Phoenix Seminary faculty in 2015 and teaches courses in Systematic Theology and Church History. You can read more about him at his faculty page here.