Brian Arnold on Justification in the Second Century

Home » Brian Arnold on Justification in the Second Century

At Phoenix Seminary, we treasure the motto, Scholarship with a Shepherd’s Heart, and we teach, mentor, serve, and publish with it in mind. In this post, summarizing his recently published book on the topic, Dr. Brian Arnold clarifies the earliest history of the doctrine of justification by faith alone. We hope you find it helpful. Furthermore, look out for a future giveaway of his book right here on the PS Blog. 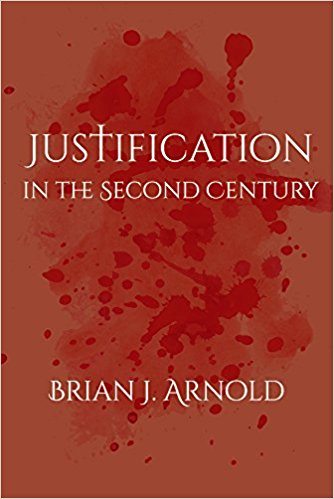 Last year Protestants celebrated the five-hundredth anniversary of the Reformation. In the popular imagination, Martin Luther’s hammer strikes on October 31, 1517 echoed all the way back in time, shattering fifteen hundred years of wrong teaching on the doctrine of justification. He alone knew Paul’s Gospel and recaptured it from a millennium and a half of corrupt teaching. Without casting shade on Luther, since he did wrangle the Gospel from the merit-based clutches of medieval Catholicism, the fair question to ask is whether Luther was the first voice championing justification by faith since Paul, or if there were voices in earliest Christianity who also believed that sinners are declared righteous by faith alone.

Before addressing that question, we need to sound an important qualification. To require that the church fathers speak about justification in the same terms or with the same passion as the Reformers is anachronistic. Doctrine isn’t truly forged until it enters the furnace of debate, and the doctrine of justification would have to wait until the fires of the Reformation to be formulated. When this is kept in mind, I argue that several voices in the second century did seem to argue along the lines of what the Reformers would call sola fide (faith alone).

Over a half century ago, T. F. Torrance argued that the earliest Christian writers, a group we call the Apostolic Fathers, abandoned Paul’s teaching of justification by faith and that they infused works righteousness into the Gospel (The Doctrine of Grace in the Apostolic Fathers). Scholars across the theological spectrum, Protestant and Catholic, agreed with Torrance. Catholics used this to confirm their teaching that salvation is based upon faith and works; Protestants continued to look to Luther as the fountainhead of justification by faith. However, if we probe the writings from the second century, I think we see more emphasis on faith alone than Torrance gave credit. To show this in the book I look at the following works or writers: 1 Clement, Ignatius of Antioch, Epistle to Diognetus, Justin Martyr, and the Odes of Solomon. Let’s look at Clement, Diognetus, and the Odes.

Clement of Rome was likely writing in the late AD 90s to the same troubled congregation in Corinth to whom Paul wrote. After exhorting the believers there to follow the godly examples of Peter, Paul, and many Old Testament figures, he made this astounding comment lest his words be taken to mean that one could earn the favor of God:

No human work could justify a person—faith alone is the only basis by which God has justified anyone. However, someone may object that Clement also said “we are justified by works, and not by words” (1 Clement 30.3). Two things are significant. First, I think Clement adds 32.3–4 lest there be confusion that he teaches works righteousness. Second, I think Clement, whether consciously or not, bridged Paul and James. Does Paul not say, “we know that a person is not justified by works of the law but through faith in Jesus Christ” (Gal 2:16) and James say, “you see that a person is justified by works and not by faith alone” (Jas 2:24)? As Protestants we often demonstrate how Paul and James were not at odds. Why, then, not give Clement the same benefit of the doubt?

Likely written in the middle of the second century by an unknown author to an unknown Diognetus, the Epistle to Diognetus contains the most beautiful expression of the Gospel in early Christianity:

For what else was able to cover our sins except the righteousness of that one? In whom was it possible for us, the lawless and ungodly to be justified except in the Son of God alone? O the sweet exchange, O the inscrutable work (of God), O the unexpected benefits (of God), that the lawlessness of many might be hidden in one righteous man, while the righteousness of one might justify many lawless men. (Epistle to Diognetus 9.3–5)

Is this not the Gospel! Jesus is the “sweet exchange”—the holy for the lawless, the innocent for the wicked, the righteous for the unrighteous, the incorruptible for the corruptible, the immortal for the mortal (v. 2). And how does one acquire the righteousness of this one? The author states in 8.6: “And he revealed himself through faith, which is the only means by which one is permitted to see God.” Clearly Jesus is the only source of salvation and his salvation is accessed through faith.

Of the sources I survey, the Odes of Solomon are the most unfamiliar to people. The Odes are the first known hymnbook in the early church. It is one thing to study what various theologians said in the second century, but another thing to eavesdrop on what the common Christian sung. Songs are what would transmit doctrine into the heart. Luther understood the importance of writing theologically sound music, saying, “Let others write the catechisms and the theology, but let me write the hymns!” And here in this songbook we see several places where believers sang about justification. Consider these three Odes:

And I was justified by my Lord

For my salvation is incorruptible

I have been freed from vanities

and am not condemned

My chains were cut off by His hands

I received the face and likeness of a new person//And I walked in Him and was saved. (Ode 17.2–4)

I was rescued from my chains

And I was justified by His kindness

The connection between justification and faith is made most explicit in Ode 29.5–6, where justification is tied simply to belief and grace:

And I humbled my enemies,

And He justified me by His grace.

For I believed in the Lord’s Messiah,

And considered that He is the Lord.

If one didn’t know any different, they might think that Charles Wesley wrote these words, since his famous hymn And Can It Be strikes a similar tone:

I woke, the dungeon flamed with light;

My chains fell off, my heart was free;

I rose, went forth and followed Thee.

The point in Justification in the Second Century is not to say that there was a single voice on justification in the early church or that they expressed the doctrine with the same force or eloquence that the Reformers did. The point is to demonstrate that those in the second century did not abandon the Gospel of justification by faith. The great church historian Jaroslav Pelikan said it well: “To condemn the doctrine of grace in the apostolic fathers, for example, for not being sufficiently Pauline greatly oversimplifies the development both within the first century and between it and the second. There is a continuity in the doctrinal development from one century to the next, and there is a unity within any particular century; neither the continuity nor the unity can be identified with uniformity.” Were there Christians in the second century who expounded Paul’s doctrine of justification by faith? I think so.

Dr. Arnold joined the Phoenix Seminary faculty in 2015 and teaches courses in Systematic Theology and Church History. You can learn more about him at his faculty page.