Born from Israel to Redeem the World

Home » Born from Israel to Redeem the World

In two previous posts, we have been looking at Galatians 4:4’s declaration that God sent his Son in the fullness of time. And we’ve been asking what made it the right time. We have looked at Greece and Rome and what they contributed to the fullness of time, but now we must look at the most significant group of all—the Jewish people. God delights in doing big things through small people, which is why he chose Israel. But what did the Jews contribute that made it the right time for Jesus to come? The womb and the word.

Galatians 4:4 tells us that Jesus was “born of a woman, under the [Jewish] law.” Jesus was born to a Jewish girl, and Christianity was birthed from Judaism. God had made a covenant promise to Abraham. He promised to bless the nations through his seed—Jesus (Gen. 12:1–3, 7; Gal. 3:16). God then went on to make several more covenants with Israel: the covenant law given through Moses, a covenant with David that his son would sit on the throne forever (2 Sam. 7), and finally the promise of a new covenant, one in which God’s Spirit would dwell with his people and our hearts of stone would be replaced with hearts of flesh (Jer. 31; Ezek. 36). This was the Jewish hope as they waited for the Messiah to come, and Christianity is the fulfillment of these promises.

You see, at various times throughout the centuries, God had spoken to his people. God spoke. Did you catch that? Those two words are life-changing, and too often taken for granted. God does not owe us revelation, but he wants to be known and worshipped. At the very beginning, he spoke, and then later he had his prophets write down his perfect words so that we can have them forever.

Notably, God spoke to Israel. Even when his chosen people turned a deaf ear, he continued to call them and tell them in advance that his salvation was coming. God wanted his children to know about Christmas. Here is how the Apostle Peter tells it:

Concerning this salvation, the prophets who prophesied about the grace that was to be yours searched and inquired carefully, inquiring what person or time the Spirit of Christ in them was indicating when he predicted the sufferings of Christ and the subsequent glories. It was revealed to them that they were serving not themselves but you, in the things that have now been announced to you through those who preached the good news to you by the Holy Spirit sent from heaven, things into which angels long to look. (1 Peter 1:10–12)

The time was right. The kindling was set for the Light of the World to be born. The Greeks, the Romans, and the Jews had set the stage and allowed Christianity to plant, grow, and bear fruit throughout the ancient world.

When we gather to celebrate Christmas later this week, let’s remember all that God was up to when he sent his Son at “the fullness of time…born of a woman, born under the law, to redeem those who were under the law, so that we might receive adoption as sons” (Gal 4:4–5). 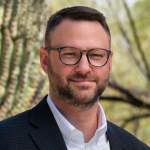