3 Dangers to Avoid as a Christian at a Secular University

Perhaps more than ever, today’s Christian students face a significant question: How do I maintain my faith, and even grow spiritually, at a secular university?

This is a topic I explore in my new book, Surviving Religion 101: Letters to a Christian Student on Keeping the Faith in College (Crossway, 2021). In many ways, the book is a personal letter to my three children, especially my oldest daughter, Emma, who started as a freshman at my alma mater, the University of North Carolina, in 2019, and is now a junior.

The book focuses on a particular demographic within Christianity—students who are struggling—but it’s really for everybody. It will benefit any believer who is asking key questions about why they believe what they believe, and who is trying to survive a secular environment with their faith intact. You don’t have to be 21 to feel that. You can be in your late 20s in the business world. You can be in your 40s and in the peak of family life. At some point, we all ask these hard questions, and as Christians, we need to know how to answer our questions biblically, rather than letting the world dictate the answers to us.

As we discuss the dangers inherent to a Christian student entering a secular university, let me briefly say a word about the book’s title, because I think it plays into the discussion. The word “surviving” prompted much discussion between my publisher and me. Some thought the word was too modest, perhaps even passive. They asked, “Don’t we want to encourage people to do more than just survive?”

It’s a legitimate question. But I think the word captures the reality for a lot of Christian students in college. They feel like they’re sinking below the waves and fighting for their life. And honestly, the whole college experience is one of spiritual survival. The first step is not to conquer the world; it’s simply to take the next step and make it through with your faith intact. For many young believers, the immediate issue is to stay in the game. Don’t retreat. Don’t fall away. Then, as you survive and grow, you’ll get to the next stage of the Christian life.

Not a New Problem

Struggling with faith in college is not a new thing. A man named Philip Wentworth once published an article in The Atlantic entitled “What College Did to My Religion.” He begins the article as follows:

To say that college does something to the average student’s religion is to state a truth which will be conceded by anyone who has given the matter a moment’s thought. Nine young men and women out of ten who will receive their degrees this June would probably admit, if they were called to testify, that education has acted as a poison to their faith. In many instances the virus generated by the reasoning processes induces only mild distemper of skepticism, but in others it works like an acid, eating its way into the bump of credulity until in the end this estimable organ is completely corroded. Devout parents and clergymen have frequently observed this phenomenon and deplored it. When they discuss it, however, as they often do, they betray a common failure to understand the intellectual chemistry which has produced this wholesale apostasy of the younger generation.

Wentworth went on to share how four years at Harvard turned him from evangelical Christianity to secularism. His article was published in June 1932.

It’s clear that struggling with secularism at university is not new. However, the problem has not improved. Today, things are moving quickly in a post-Christian direction, both in the academic environment and in society in general. In prior generations, a Christian student could take some solace in knowing he or she wasn’t the only believer on a secular campus. But today’s students very much feel like the minority, and it’s only becoming harder for them.

Many Christians struggle in college because they can’t get past the statistical anomaly that all the smartest people in their little world don’t believe the Bible—and that they are seemingly the only ones who do. When they look around at their campus, they see all these people with PhDs who think the Bible is crazy. And they think to themselves, What’s the statistical likelihood that I’m right and all of them are wrong?

This is the key issue. But we need to consider how people form their beliefs, why they believe what they believe, and the role of worldviews. College professors are not neutral. No one is. You can’t just count noses to figure out what to believe, because people don’t form their beliefs exclusively on evidence. They do it on many other factors as well. Beliefs are formed based on earlier, more foundational beliefs, that someone already has. Understanding this will help set the tone for the whole college experience.

A 2007 study entitled “The Social and Political Views of American Professors” revealed that only 9.2 percent of respondents categorized themselves as conservative, compared to 46.6 percent as moderates, and 44.1 percent as liberals. Since then, it has only gotten more polarized.

Such statistics reveal that universities are more lacing in diversity than we might realize. Our culture talks about diversity mainly in terms of ethnicities, race, and gender. While those are indeed important issues to discuss, universities are supposed to look at a diversity of ideas. This is what they were originally founded to do—getting all the ideas on the table so they can be discussed and debated.

Unfortunately, in the last several decades—maybe even 50 years—universities have become more ideologically driven, and they’re not interested in all the ideas. College professors, and therefore classrooms, have become intellectually homogenous. People who are intellectually homogenous tend to hire others who think just like they do. These days, it’s very difficult to get hired at a secular university while professing evangelical Christian ideas.

These issues of homogeneity and competing worldviews present great challenges that our culture is going to have to face sooner or later. But college students—and their parents—need help today. As Christian students enter the collegiate fray, here are three dangers to avoid:

The first is naïve overconfidence. This is the first of two extremes I’ve noticed among Christian students at secular universities. Here’s the line of thinking: I grew up in a Christian home. I was raised in a good church. I’m impervious to spiritual challenges. I don’t have to put up my guard. I can handle anything thrown my way.

Sorry to burst your bubble but skipping lightly through the halls of academia just doesn’t work. You’ve got to be ready. It’s spiritually challenging out there, and you need to take it seriously.

Christian parents, therefore, need to be thinking carefully about how their child is being prepared for the university environment. This doesn’t mean we have to create little Ph.D. students, but it does mean we need to give students the basic categories and tools to know how to deal with non-Christian beliefs.

Generally speaking, I think most parents and churches struggle in this area. We tend to think our kids are best served by protecting them from any exposure to non-Christian thinking. Some worry that if they have certain conversations, they’ll upset their child’s nascent faith.

But I think this mentality can be counterproductive. It’s not all that different than parents who overprotect their children from germs. Germaphobe parents who wipe down every counter with disinfectant and make sure their kids wash their hands 30 times a day might think they’re being helpful. But if a child doesn’t get exposed to certain germs early on, their immune system can stall. They actually need some exposure to germs for healthy immunity.

The second extreme is unbridled suspicion. While some students have naïve overconfidence, other students can enter the university context with a type of paranoia, and perhaps even a martyr’s complex. They think everyone is out to get them, and that their professors are like Darth Vader.

But this simply isn’t the case. Most professors, even if they don’t have a Christian worldview, are not trying to destroy people’s faith. They are not intentionally trying to target evangelicals.

Moreover, this attitude can prove to be very counterproductive. It makes a Christian student defensive, overly sensitive, and unwilling to listen to other people’s viewpoints. That sort of posture will make university life very, very difficult.

Finally, there’s the danger of what I call the horror-movie mistake. If you’ve ever watched a scary movie—I happen to love scary movies—you know the protagonist always makes the same mistake. They go off alone… in the dark. Even though it defies common sense, and even though the audience is yelling, “Don’t do it!”, they make the same mistake every time.

The same lesson is true spiritually. If you are struggling with what you believe, don’t make the horror movie mistake. Don’t wander off into the dark alone. Stay in a group and stay in the light.

How do you do that? You find a good church. You find good Christian fellowship. You tackle your questions and doubts in community. You work through them in groups, in the light, with people who love Jesus. 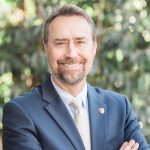 Dr. Michael Kruger serves as president of Reformed Theological Seminary’s Charlotte, North Carolina, campus, as well as the Samuel C. Patterson Professor of New Testament and Early Christianity. Dr. Kruger is the author of several books, including Christianity at the Crossroads: How the Second Century Shaped the Future of the Church (IVP Academic, 2018), Canon Revisited: Establishing the Origins and Authority of the New Testament Books (Crossway, 2012), and Surviving Religion 101 (Crossway, 2021).